I picked up this number a while back totally out of the blue. As you can probably tell from the title, it’s not the usual sort of book I read. Entirely missing from this novel is political turmoil, traumatic events, philosophical diatribes and the defence of ideals which are the backbone of the novels I really love. However I surprised myself by really enjoying it.

The novel is the story of an 81 year old widower called Frank Derrick, who is run over by a milk truck on his 81st birthday. I guess that kind of sets the tone for the story really. The blurb explains that the story is about how a carer called Kelly Christmas is hired by the octogenarian’s daughter to come see to his needs for 12 weeks until he hopefully recovers. However the real story is about Frank, and it’s not so much a story with a beginning and an end as an insightful look into what it means to be old in Britain today, and I guess also more widely what it means to suffer from infirmity and loss of quality of life. It’s very funny and Frank, the protagonist, is not at all morbid about his situation. He mocks his own failing memory, waddling gait and the fact he’ll buy any old crap from the charity shop.

I think in today’s society the “old” are slowly becoming invisible, as basically the generation we think of as old- war babies- slowly disappears. In the novel Frank was born in 1933 and was therefore six when WW2 broke out. That generation is disappearing slowly, but the way we think of the old is the same- woolly cardigans, ironed brown trousers, shiny loafers/carpet slippers. What we don’t think of so much is that someone who is 70 now was 20 in 1964, and 23 during the summer of love. In ten years, the likes of the Rolling Stones and Led Zep will be in their 80s, as will their fans. Those old people don’t have the same values as the slowly disappearing straight-laced type we’re used to. Frank identified with that younger group despite demographically not fitting in it, and I think it’s interesting that in a few years the oldies sitting round the nursing home will probably have more interesting and wild life stories than we do.

I guess another major theme in the book is the one of pensioners and their boredom. Now more than ever the two groups- pensioners and the elderly- are diverging. I know people who started drawing their pension at 60, and people who kept working right into their 70s. The fact is most healthy, conscientious people today can expect to live into their mid-80s, and that number is rising all the time as the last generations to toil down mines and poison themselves with tobacco are disappearing (in the UK at least). Retiring at 60 is all very well, or even 65. But what do you do for the next twenty years. I don’t think most people can really even picture 20 years- think of it as the time from a child being born to when they’re on the front of the Daily Mail knocking back tequila and vomming in alleyways. In that huge space, what do you do? With extremely limited finances, the answer is not much. It’s hardly surprising people’s brains turn to mush before their bodies do. I’ve always been anti-retirement. There’s always something you can do no matter your physical condition, and reading about the unending boredom of the retired only adds to that sentiment.

I think another thing that comes through is obviously the fact that the elderly are no different to any other people, and thus they feel lonely when they don’t have many friends. Poor Frank begins to see his carer’s visits as red letter days when he gets to interact with another person for an hour or two. To me this just reaffirms the importance of community centres, which are slowly disappearing under government funding cuts. Older people need to be encouraged to meet and interact with each other and make those friends and connections into old age. In Frank’s case I get the feeling (though it’s not stated) that his social life died with his wife. A lot of people are in that situation, where the death of a partner is also the death of your only friend. It would make sense to encourage people to meet and bond with friends from retirement age onward, rather than just hoping for the best when it’s too late.

In any case, despite all of that, Frank is a funny man. The novel actually made me laugh a couple times out loud, which can be embarrassing at times. It’s not just that Frank’s situation and the things he does/says are funny, it’s that he knows that too and his inner monologue is almost breaking the fourth wall muse-like to kind of catch you out for laughing at him. Anyone with an elderly parent or grandparent will be able to relate to at least one of the main characters in the novel, and anyone who works in the care industry I’m sure will love it. It’s not very long either, only took me a couple days to polish it off.

Give it a try if it sounds like your thing 🙂 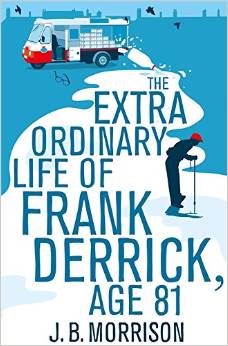